Leopold Lindtberg’s 1945 film, DIE LETZTE CHANCE, was the first film for me today, screened here in a new restoration by the Cinematheque Suisse. Shot during the Second World War, but not released until afterwards, the film tells the story of a group of refugees persecuted by the Nazis and on the run. In light of current issues in the world today, the film felt very apt and poignant.

Next up was the annual DVD Awards, the results of which you can see via my Facebook and Instagram pages. 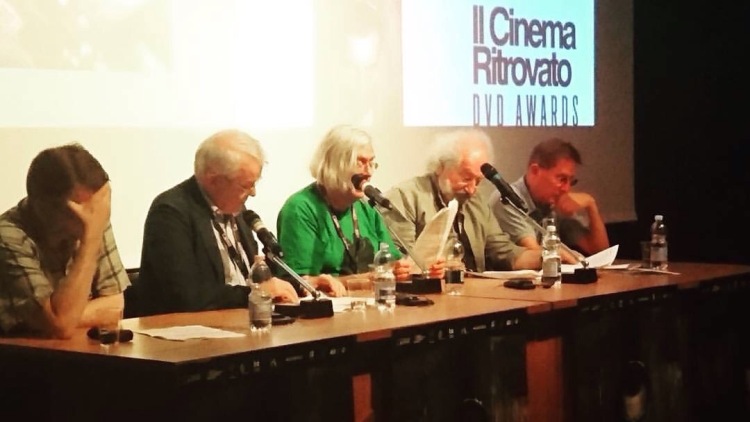 I then went to see Alain Resnais, MURIEL OU LE TEMPS D’UN RETOUR (1963). After the initial 10mins of fast cutting, changes of camera angle and playing with the chronology of the narrative, the film settled down and I loved every minute. I realise these are traits very typical of the “nouvelle vague” filmmaking style of the time, but for me today, it was more of an annoying distraction than an innovative aesthetic improvement. The film was screened here in a new 4K restoration by Argos Films.

Final film of the day, and for which I only lasted 30mins due to feeling rather ill with. Head Coles, was Youseff Chahine’s 1985 film, ADIEU BONAPARTE. I have to be honest and say the first 30mins of the film did not grab my attention enough to make me want to eagerly seek out and see e rest, but it went down will with some of my companions. This was screened in a new restoration from the Cinematheque Francaise.

Final day of the festival and my head cold is in full effect, so I limited the viewing and kicked off with Mizoguchi’s classic, UGETSU MONOGATARI. The film shimmered on the screen in this new 4K restoration from The Film Foundation, complete with new introduction from Martin Scorsese.

After a quick coffee and catch up with fiend, Neil Brand, I went for some lunch and back to the hotel for a quick nap!

Returning out later in he afternoon in temperatures just over 100 degrees, I met up with Finnish friends, Tapio Piirainen, Liselott Forsman and Anna Von Bagh to see their introduction for the second screening of Tapio’s film, PETER VON BAGH (2016)

My final film of the festival then ended up being Robert Altman’s classic western, MCCABE AND MRS MILLER (1971). Screened here in a new 4K restoration by Warner Brothers and The Criterion Collection.

My Tweets
Spirit of the Thing

just tryin' to capture it

There is no time for the innocent...

and this is not an exit.

because anything is possible with Charisma

"All art is contemporary, if it's alive, and if it's not alive, what's the point of it?" Hockney

Notes on Films and Culture

Based on truth (and lies).

The Seventh Art – Interviews about Cinema

Observations on film art and FILM ART
Wonders in the Dark

reports from the lost continent of cinephilia